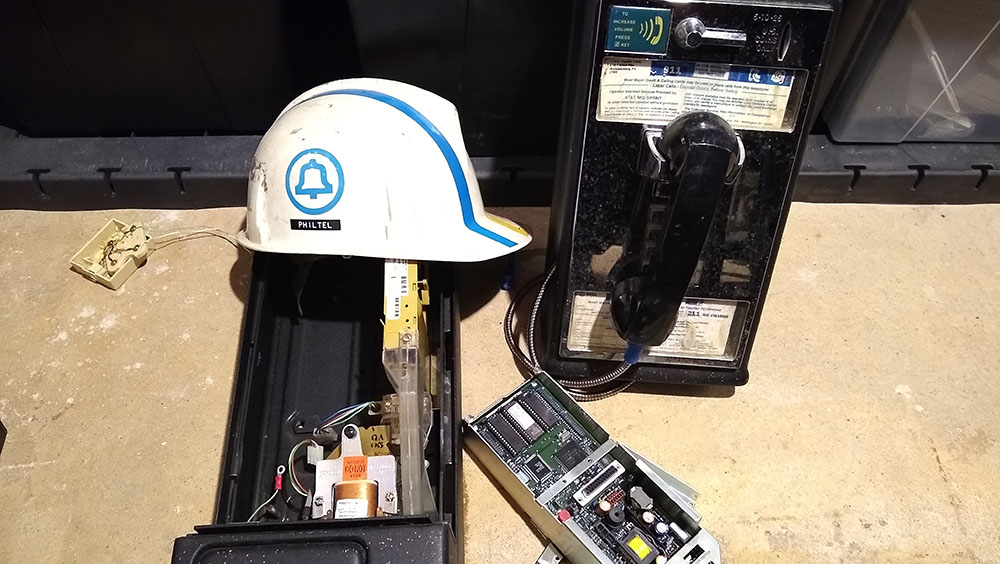 PhilTel is an amateur phone collective looking to install new (to us) payphones within the city of Philadelphia. Any payphone installed will be completely free-to-use, allowing the user to place calls within North America. Additionally, we would like to provide various experiences and services through the phones; these could be as simple as voicemail, fun as a phone number that randomly calls other payphones, or as complex as an integration with phone collectors’ networks to allow phone-phreaking and exploration!

So I just use this phone to call people?

Yes, you can use a PhilTel phone just like any payphone (without the need to pay) or landline phone! Calls are free to most numbers in North America.

In addition to connecting with the traditional telephone network, we are also looking to connect with collectors’ networks and other payphone projects. For more information check out the Networks page.

How is PhilTel funded?

PhilTel is funded 100% by donations. If you would like to donate, please check out our donations page for options!

We do not play advertisements before, during, or after phone calls.

Are my calls private?

We collect no data from users and have no record or insight into the contents of calls. At most, we may capture the phone number dialed for diagnostic purposes, but this data is not kept long term and we never give or sell this information to anyone.

Further, calls are encrypted from the phone site to our server. Any bad actors at the phone location will not be able to inspect call traffic even if they are on the same Internet connection.

I have an old payphone in my basement, do you want it?

Probably! Please reach out to us via our contact page!

All payphones we utilized will either be acquired from donations or the used market. Contrary to anything you may have heard, it is perfectly legal to own/buy/sell a payphone as a private individual or organization.

Futel is a Portland, Oregon-based phone company started in 2014 by Karl Anderson. Futel currently operates twelve free-to-use phones (both payphones and armored phones) within Oregon, Washington, and Michigan, including one at Right 2 Dream Too, a self-managed houseless encampment in Portland. Fore more information, visit

Talk To Me is a network of five public payphones located in each of the five boroughs of New York City, that only call each other. Participants who pick up a TTM receiver set the other four ringing, inviting passing New Yorkers to answer the call. Upon connection, two unsuspecting strangers are thrust into conversation and left to navigate a serendipitous interaction with their neighbor. Talk To Me was launched in June 2022 by Jordan Seiler. For more information visit

OIRCT is a project in France setting up telephone booths with free-to-use, public telephones.

Phreaking is a term to describe the act and culture of exploring telecommunications systems, usually the public telephone network. PhilTel is phreaking-friendly, and you can read more about some specific phreaking acts that can be perfomed on the PhilTel network on the Phreaking page.

How does the PhilTel network work?

To power the telephone network that drives the payphones, we are making use of commodity hardware (especially used/discarded and low-power-consumption hardware) and open-source software where available. The workhorse of our network is an Asterisk-based Public Branch eXchange (PBX) running on a virtual private server (VPS) on the Internet. Asterisk acts a bit like a bridge between the Public Switched Telephone Network (PSTN) and our collection of payphones; we can facilitate connections between the payphones and the outside world seamlessly. To connect to the PSTN, we get service through a Voice over Internet Protocol (VoIP) provider (think of them like an Internet Service Provider but for telephony). However, Asterisk is much more powerful than a simple traffic controller, and it lets us create our own services or connections to private telephone networks that any caller can access!
Each site where a payphone is installed will connect to our Asterisk server through two pieces of hardware: a GL.iNet GL-AR300M16 router and a Grandstream HT801 Analog Telephone Adapter (ATA). These devices connect to mains power (pulling less than 1A at 5V in total), though we hope to explore solar options in the future. 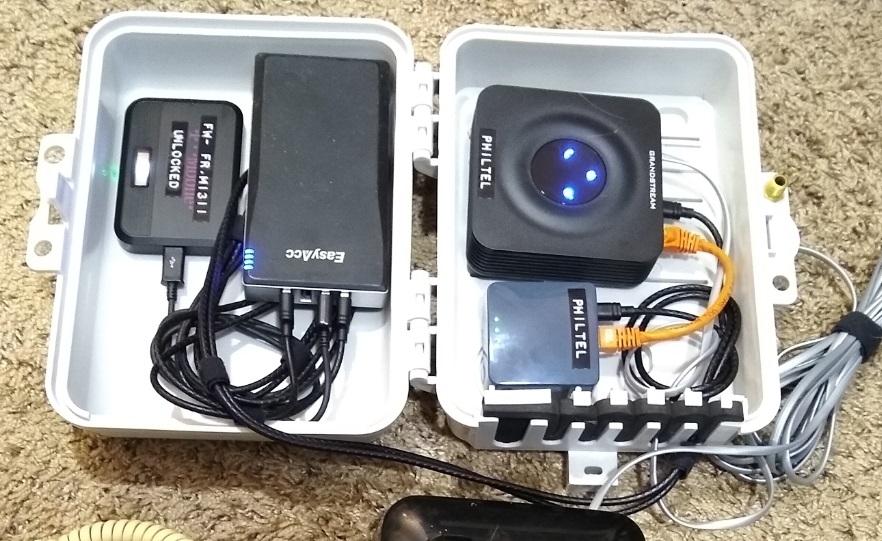 The router (similar to your Internet router at home) runs software called OpenWRT that allows for more robust features than typical router software and provides a consistent experience for the administrator configuring it (even if we had many routers made by different brands). Another piece of software called OpenVPN is installed on both the router and our Asterisk server to provide an encrypted Virtual Private Network (VPN) so devices connected to the router can communicate with services on our server as though they were physically on the same network. 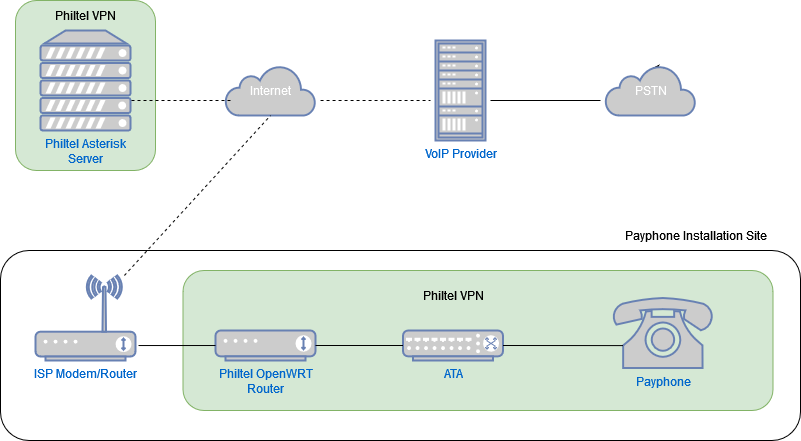 With the VPN, any bad actors using the same network as our phone at the installation site will not be able to investigate any traffic related to a call being made. Further, PhilTel does not monitor who is using the phone or the contents of any call, though phone numbers may reside in our server logs until they are cycled out.

But how does the payphone, or any old phone with an RJ-11 jack for that matter, communicate with our Asterisk server? This is where the ATA comes in. The ATA has two jacks on it: one RJ-11 jack for a phone and one RJ-45 jack to connect to a router.

Essentially, the ATA acts as an analog-to-digital converter and helps our old payphone speak the popular Session Initiation Protocol (SIP), allowing Asterisk a way to send/receive calls to our payphone over the Internet! To the payphone, the ATA behaves just like the PSTN would, so everything works the same way it would if the phone was connected to a standard landline. 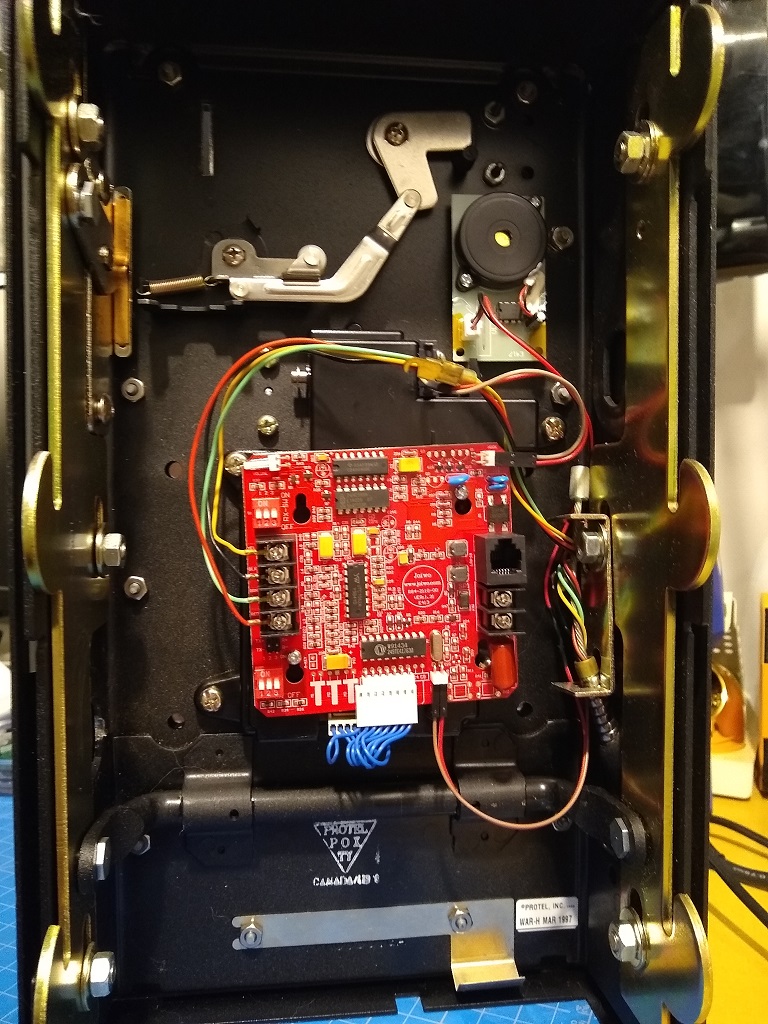 For now, PhilTel phones make use of a “coinless” circuit board that replaces the existing electronics in the phone that would determine how much to charge for calls and handle payments. The new circuit board has a much smaller footprint than the older board and mounts cleanly to the back of the phone’s dialpad. In the future, we hope to repurpose the older phone electronics to reduce waste and still keep calls completely free!